Many years ago, a university friend sent me her daughter for 2 weeks, in the summer, while she and her utterly vile, soon to be ex-husband battled things out. I was not only determined to show Julia a marvelous time (I did) but more specifically, I was determined that she experience something, anything that she couldn’t find in the US. After much thinking the answer was obvious. Romans. Lots of lots of Romans, because while plenty of people are happy to devulge the locations of alien invasion, there are absolutely no Roman remains in the 50 states. And that is how the children and I, plus Julia, spent a fantastic week on Hadrian’s Wall. Far,far from London. But the Romans spent plenty of time in London, as well. They founded Londinium, a thriving city on the edge of Thames from 43 to 410 AD, the footprint of which remains, more or less, current day City of London. Roman ruins are scattered all 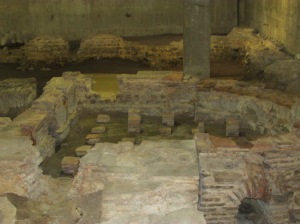 round the City, many of them only revealed when Hilter’s bombs destroyed so much of the Square Mile in WWII. But ruins in a modern city are a funny thing. Often, the ruins are known, but kept buried, both for their own safety and the needs of the current populace. Lately, the trend seems to be swinging toward finding a happy balance between the intellectual curiousity of the public and the desires of developers, by creating viewing platforms within the modern buildings. This is a very good thing indeed. Especially when London wants to show off for guests.

I wrote last year about some embarrassingly pointless Americans who insisted on visiting my city and hated it. But they are bad Americans. They are probably going to vote for Donald Trump. Happily, most of the Americans who visit London are good ones. And if they are MY friends visiting, well, obviously they are the best of the best of the best and deserve….well, some Romans. …so I really needed to come up with more than a few old walls for Greg and James, two friends from NYC days and their respective 11 year old sons Danny and Alexander. Fortunately, as so often happens, London responded beautifully by opening Billingsgate Bath House on Lower Thames Street just in time for their visit. Thank you London.

Billingsgate Bath House is a Roman complex underneath an otherwise unremarkable concrete office building at the eastern end of Lower Thames Street. The Victorians were aware that the complex existed, and there must have been something about it that

appealed as they didn’t demolish it to make way for something else, as they so often did, but just left it alone, the nicest thing they could have done. After protracted negociations with the council, the Museum of London was given permission to offer tours to the public. I couldn’t wait to sign us up!

The site is so new and the staff so eager, that they came and found us wondering up and down Lower Thames, worried that we might have trouble finding it, which we did, and escorted us into the site. I do appreciate good customer service! And then we were treated to a wonderful, funny and thoughtful private tour. We learned, among other things, that where building works go, nothing much has changed. Research suggests that the earliest and best built parts were constructed at the beginning of the end of Roman rule on this isle. A villa or perhaps a guest house. With magnificent underfloor heating. The engineering required, all still very much on display, is spectacular. But as so often happens, someone decided to make some unfortunate changes at a later date. Shoddy workmanship and extremely poor planning

meant the floor would have become significantly less effective as time went on. Was it cheap labour? Or just cowboy builders? Worse, a little DIY? Happy to hear the Roman empire struggled with these difficulties as well.

And then the bath house itself. A very small version of what would have been a grand structure back in Rome. Maybe that was the problem, that whoever designed this bath house had never actually been to Rome. Maybe they didn’t really know what they were building and all the guess work resulted in a strangely improbable arrangement. Rooms all too small and only a tiny tub in which to plunge. A tub with no drainage,  no less. How odd. How dirty! Maybe the owner just ran out of money and wound up with only an approximation of the original plans? Maybe the baths here weren’t meant to be the public occasions they were in the old country, but a private location for ….well, things that require privacy? Or just more bad workmanship? Plenty for the imagination to play with.

And then there is the mystery of the Anglo-Saxon brooch…..so many options…we of 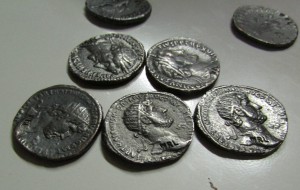 course went with the secret lovers….oops, I say too much. Grab your favourite people, friends or relations, and bathe in some Roman history.