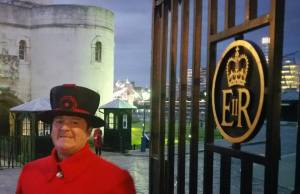 “Halt! Who Comes There?” asks the solider at The Ceremony of the Keys. This official locking up of the Tower of London, a ceremony dating back more than 700 years, takes place every single night, without fail. During an evening of enemy bombing in WWII the ceremony was delayed. The Yeoman Warders sent the King a written apology. Such is the import of this ceremony. Important and beautiful. Spine-tinglingly beautiful. And so it was with much, much pleasure I attended with my younger two and The Guests, two friends and their sons over from both coasts of the USA. It was a clear, warm night, a perfect evening to be at the Tower. It is a magnificent place during the day. At night it is magical, eerie, otherworldly; you can almost hear the footsteps of those who came before. And the ceremony is more than just tradition, it has a sacred quality to it, 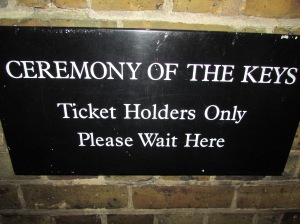 heightened by the fact that absolutely no video or photography is allowed and strict silence is requested. Which meant we all had to stand still and watch, listen, absorb, quietly. Something we do so rarely these days of non-stop technology. A brief digital detox, if you like. And history. To be part of something so old, so steeped in legend and lore, is a true treat indeed. I will stop there, as should any of you reading this have the opportunity to see it yourself, I would like your eyes and minds not to be fuddled by my observations. It is worth a fresh, 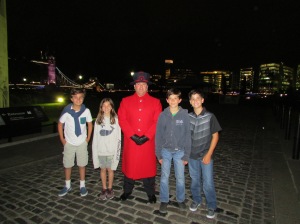 unfettered reaction. Of delight and wonder.

If, before or after the ceremony, you would care for a small drink, may I suggest the fantastically, but grammatically incorrectly named pub The Hung Drawn & Quartered, just across the way from the Tower. People are hanged. Pictures are hung. But that is a fussy detail. The pub refers to a particularly gruesome method of execution for men convicted of high treason, dating back to the 13th century. Hanging until almost dead, but still conscious, disembowelment, emasculation and finally a (at that point merciful) beheading and cutting up of the body into 4 pieces. This pub carries the name in remembrance of Major-General Thomas Harrison, one of the men who met his end in 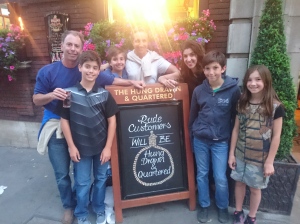 this way. Why? Because it was Harrison who signed the death warrant for Charles I. There is a plaque on the outside of the pub, quoting the famous 17th century diarist Samuel Pepys’ account of Harrison’s execution at Charing Cross; Pepys lived round the corner from the pub, which probably explains why it is there. When the first Charles’s son, Charles II, was restored to the throne, 11 years later,  he settled a few scores. Revenge can be a bloody business indeed. But don’t be put off by this grim scrap of history, it is a lovely, charming place. Welcoming to children, if not too busy, and beautiful window boxes (yes, that matters.) 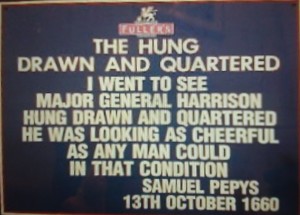 “So,” I hear you asking, “how do I get an evening like this for myself?” It is possible, as long as you have patience. The Ceremony is free and open to the public, but tickets are limited. Most evenings sell out months in advance. For those of you who are organized, it will be some worthwhile advanced planning. And if you spend some time at the pub, don’t forget to raise a toast to My London Passion, may she be dazzled by this city for years to come.