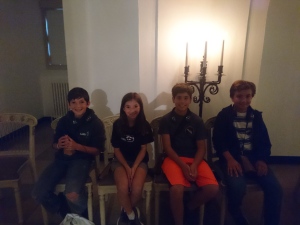 Good guests were coming to town. Really, really good guests. So I needed to pull out the proper showing off stops. Fortunately, as regular readers will know, London treats me very well. Often, I have but to ask and I am given. No exception this time. I wrote “what to do with James and Greg” on the top of a blank piece of paper and within hours the HRP sent me an email about their brand new interactive tour, opening just days after The Guests arrived. Would I be interested in tickets??? Would I ever!!! And so it was that on a sunny afternoon (of course London was sunny for The Guests) that James and his son Alexander (age 11), Greg and his son Danny (age 11) and me with my Stephen and Katherine (ages 10 and 12), history lovers all, set off to explore Whitehall Palace, an enormous complex that extended from Trafalgar Square to Big Ben and over into St. James’s Park. At its height it had more than 1,500 rooms, far more than 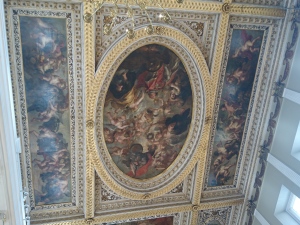 either Versailles in France or the Vatican in Rome. It was a favourite of Henry VIII, who married two of his queens and died at the Palace. Both Charles I and II also died there, under very different circumstances. It hosted plays and masques and enough intrigue to keep thriller writers busy for years. Unfortunately, the whole thing, except for Banqueting House, with its still stunning Peter Paul Rubens ceiling, burned down 300 years ago. But that is the beauty of technology. And imagination. And feet. 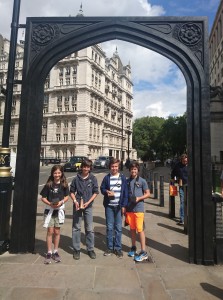 Using headphones and the two before mentioned accoutrements, the tour takes you round and through Whitehall Palace, exposing celebrations and secrets along

the way. It runs in geographical rather than chronological order, so we were sometimes a bit confused by the details. But the main acts were great. Playing Cordelia in the first ever performance of Shakespeare’s  King Lear, overhearing the secret marriage of Anne Boleyn to Henry, eavesdropping on the discovery of the Gunpowder Plot. A busker sang us a ballad near 10 Downing Street. The triangular device we carried along the way turned into a sword, complete with satisfying swishing sounds. We enjoyed the full gruesomeness of a cock fight in Horse Guards Parade, though some chose to watch a joust instead. We heard fire consuming the building without mercy and the equally merciless looting that took place after. But best of all, BEST of all, we held the beating heart of Charles I in our hands as he was executed, his 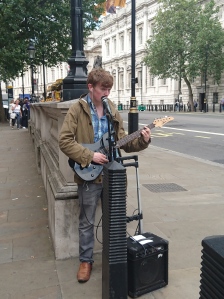 head removed from his body just above the current entrance to Banqueting House, the throbbing device in our hands made still by an axe. How often do you get to hold a dying man’s heart in your hands? That alone is worth the tour.

It is only running until 4 September, 2016, so book those tickets now and get ready to live history. 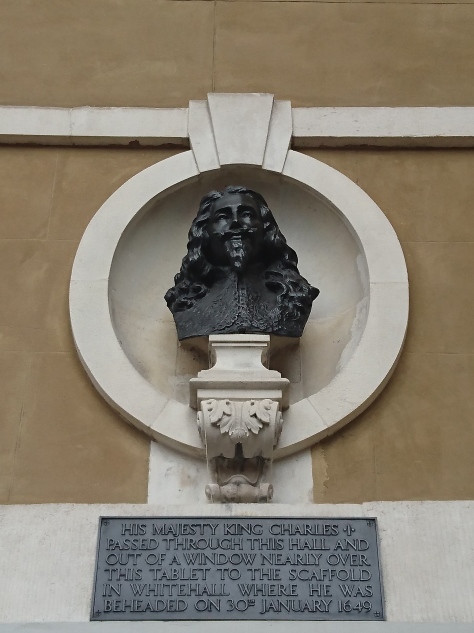