The British love to dress up. Any excuse will do. Fancy dress, as it is called, is a staple of the social scene, year round. Costumed runners have long been part of races of all lengths, especially for charitable fundraising.  Why not combine the two? Not a great idea, so I thought. I am not a fan of dressing up for parties. I really don’t like dressing up to go running. But when in Rome, or London, to be exact…I have run in a bunny costume, particularly humiliating as it was after Easter so we all looked deranged. I have also run in a gorilla suit, much too hot and heavy to try again. In 2011, the older two children and I ran in a Nativity run. The remit was to dress as a Nativity character. I dug out a battered pair of wings from our dressing up box. My daughter wore a cape, crown and carried a box, a wiseman obviously. Joseph ran in his bathrobe holding a real hammer. He was Joseph because he is Joseph. The organizers seemed overwhelmed by this fact, as if he was in on a secret joke. They couldn’t stop mulling it over aloud, which was rather off putting.  As I said, I’m not much for the costume runs. With one big exception.  I have run in a Santa suit. Many, many times. Too many to count now. The Battersea Park Santa Run has been a fixture in my diary for years now, even when I wasn’t in a running frame of mind. Usually,

I have been able to convince a child or two to tag along. Felt, one-size fits all, santa suits are distributed upon arrival at the start, which means we all look the same. For most, the suit is far too big, though occassionally there are matching child-size ones, ill-fitting in their own way, so we are rather a motley crew of santas. And the beards are horrible. But we are all willing. No one doesn’t wear the suit, and the few girls who show up in sexy elf suits just look like idiots. They are shunned by the pack. I love this race. For many reasons, but most especially for the looks on the young Battersea residents’ faces, staggering round the park in hopes of clearing their holiday overdosed heads, when suddenly one thousand (literally) santas come lumbering along….”I am still

drunk” and “I’ve got to stop the recreational LSD” are but a few of the visible responses. We santas wave, we cheer, we photograph ourselves and others as slack jawed strangers try to settle their over-excited dogs. A perfect way to start the Christmas season!

This year I decided to try something new and signed up for the City Santa run, and convinced 3 of my children plus Katherine’s good friend and frequent running partner, Lexi, to join me. As you know, I will do pretty much anything in the City. And running in the City is a beautiful thing. This morning was perfect, blue, sunny sky and just cold enough to make the fabric felt a welcome overcoat. The santas gathered were fewer in number than Battersea, but just as enthusiastic, maybe more so. The crowds watching were also fewer, but made up of tourists instead of hungover locals. They were amused, delighted, baffled, all holding phones aloft. No telling how many of us are on strangers’ social media sites.

And what a glorious run it was. Starting from the north end of Millennium Bridge, a flood of red flowed, poured over my favourite bridge, much to the surprise of early morning strollers. We continued along past the Tate and the Globe, back across Southwark Bridge. Along the Thames Path the Shard and Tower Bridge came into sight, dodging tourists I drank deeply of this view I love so much. 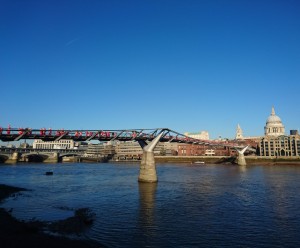 Through the hordes queuing to get into the Tower of London and then back along Fenchurch Street, through the festive Leadenhall Market and then the final bit, my beloved St Paul’s ahead, to the finish in Paternoster Square. The race was only 6k, yet it seemed to pass in seconds. And despite the cloying felt suit, I felt invincible. Yes, the world still exists with Syrian and Brexit and Trump and upcoming French elections and Italian referendum and Austrian vote (relieved to have just seen the result) and the youth football child abuse, but for a little bit of time, none of that mattered. Instead, my eyes and brain could only concentrate on things I love: art, theatre, history, Harry Potter, beauty. The things that keep us all going in troubled times. Running in the City, the city I love the most, it just might be what gets me through.