I believe in lots of things. Love, the kindness of strangers, the power of art, the magic of the ordinary and connections. Connections most of all. I see them everywhere. I experience them constantly. I would love to say something like: when I stand very still I see the universe weaving her complicated web of connections. But I don’t stand very still, ever. Or rarely ever. Instead, I toss myself headlong into the day. Maybe it is for this reason that connections continue to catch me out, surprise me. The unexpected delights me. For example, the delight of a day that starts out as normal (whatever that means), then takes a few turns and suddenly I find myself being driven to the Tube station by none other than artists Gavin Turk and Deborah Curtis. They are not just  world famous, influential artists, but serious game changers in the creative world. And we talked about art!!!…if only my 17 year old self could see me now….wait, wait, let me try to find some sort of beginning to this tale.

During the London 2012 Olympics, I was filled with even more love for London than usual coupled with a general, overwhelming love for my fellow human beings. Under the spell of all this tenderness, I noticed Tracey Emin’s poster for the Paralympics. An artist I had previously dismissed for her drunken buffoonery had produced, to my eyes, something of exquisite and tender beauty. I was entranced. Then came the neon signs, with all their vulnerable romanticism. I adore them. In Las Vegas, in order to see her signs at their best vantage, I braved a rooftop bar/pool that was like a scene from the In-

Betweeners film,  such is my devotion.  When Tate Britain announced that My Bed was back on display I rushed over. And have returned many times. How could I have not gotten it before? Never mind the filth and the rubbish and the morning after pills. This is a work of heartbreak. Perhaps it should be called “what was will never be again.” I know everyone focuses on the dirty sheets and vodka bottles, but it is so so much more than that. It is the debris of paralyzing depression. The I-have-no-reason-to-get-up-ever-again misery, in all its cheap, crumpled loo roll as tissues and over the counter pain relief pop outs and plain “I No Longer Care” grime. I love it.

Then came The Other Art Fair, at the Old Truman Brewery. Artists representing themselves, so a chance to meet, chat and buy with no added commission. All good things. The first thing that caught my eye was a wall of matchbox artwork (as in artwork made with matchboxes) under the enticing banner, The House of Fairytales. Oh yes….I was over like a shot. And then I saw it…..a matchbox version of Emin’s bed.

Complete with fags and pills and tights. I had to have it. HAD TO!!! It wasn’t for sale as such, instead, an item in a silent auction for the charity, The House of Fairytales. Founded by Deborah Curtis, artist (and wife of Gavin Turk), it is a national organization aimed at making the arts, and the creative learning that goes with art, available to children of all backgrounds. I hurriedly scrawled a bid, then went in search of the artist who had created it, not Emin herself, obviously, but equally obviously, a fellow fan. And find her I did. On Stand #15. JanaNicole. American. An artist of gorgeous, vibrant, clever, often nostalgic mixed media pieces who lives in a stunning part of England with her young family, near a haven for opera fans….oh the conversation bubbled with enthusiasm and shared passions. She sounded so much like me. In fact, there was something about her that seemed particularly familiar, not just our accents, not just our ages….when we finally got round to the “ok, where are you from…” stage of the chat I think we both knew what was coming…oh yes, though she claims Southern California on her resume, she spent a few years in the next school district over from me (a much posher one) in the mid-West, a place her father still lives. We probably went to the same parties. Would we have recognized the “I must get out of here” desperation in each other had we met then? Possibly not, but nothing like a proper anywhere-but-there rant to bond two people. Now I was determined to win the bed. Her bed. My bed.

Thanks to some last minute auction strategy, I did get it. I was thrilled. Then came the phone call, “hello, would you like us to post your matchbox bed or would you like to come to Gavin’s studio and have a cup of tea and collect it.” Seriously? For those of you who don’t chase round after contemporary art and the artists who create it, Gavin Turk is one of the original 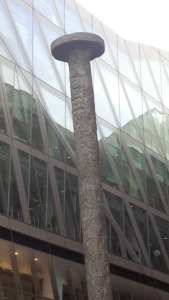 Young British Artists, or YBAs as they are more often known, brash, bold, barrier breakers who began to exhibit together in London at the end of the 1980s. People like Damien Hirst and the above mentioned Tracey Emin. Love ’em or hate ’em, these guys put British art back on the international map. Turk, who famously created his own Blue Heritage Plague as his graduation exhibition, often explores the ideas of identity and authenticity, including everyday objects in painted bronze. My personal favourite is Nail in One New Change, in the City, perhaps a nod to the fact that this extraordinary building of steel and glass was built completely without such tools.

Turk opened the door himself, “Hello,” he bellowed out and offered his hand. I was almost struck dumb. Almost. But the fetching stripes in his suit startled me back to normal. I bellowed a greeting in return. The studio is very much a working studio, and lots of work was taking place. I didn’t even think about trying to take a photo, of anything. Instead, I was given a delicious cup of coffee and had a long, long conversation with Deborah Curtis. What a charming and fascinating woman, with something insightful to say on, well, everything. Textiles, art, museums, state of the world…I could have listened to her forever. But I had to get back for a karate club pick up. With my matchbox bed all wrapped up and in my hand, I headed out the door. Only to be called back, “we are leaving now as well, shall we drop you at the Tube.” Ummm, yes please. So there I was, in the back of their car, Deborah Curtis driving, Gavin Turk musing about art….oh pinch me now. At moments like this I think “if only my 17 year old self could see me now….” but, no. Actually I don’t. Because remembering how much I had to enjoy ahead gives a lovely bittersweet tinge to the memory of those awful teenage years. Because “don’t peak too early,” is the best piece of advice I was ever given. And lucky, lucky me, I haven’t peaked yet…who knows what tomorrow may bring. Can it top my own little Tracey Emin bed? Well, I am open to the possibilities. And with London on my side, I have no doubt there are many more possibilities to come.