I love the Northern Line. I really do. Ok, it can be a special form of over-crowded hell  during the morning rush-hour, but I rarely  have to travel during rush hour. And it takes me everywhere I want to go. Circus ( Highgate, Old Street) at the top end, museums and theatre (Tottenham Court Road, Leicester Sq, Charing Cross, Embankment) sprinkled throughout the middle, Southbank (Waterloo), home. 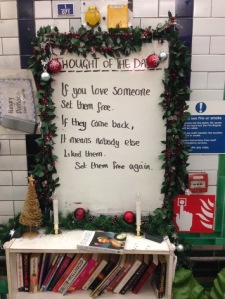 Pithy “thoughts of the day” and classical music greet me at some of my favourite stations. Books are often free to take at Clapham North. 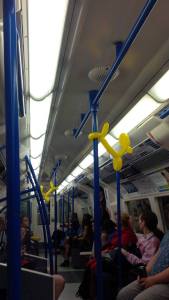 On an early Sunday morning I watched a man create and then tie balloon animals to the poles in my carriage before leaping out of the doors. A lovely, random act of fun for the Northern Line traveler. 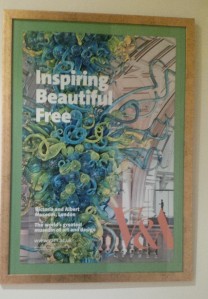 And where would I be without all those posters with the latest cultural offerings. I depend on them. Some of them I grow very fond of. I loved the V&A poster with the Chohuly chandelier so much I spent years and years trying to get a copy for myself. After much persistence I did it. It hangs, in a gold frame, outside my kitchen.

Last week, a man complimented me on my shoes on the Northern Line, not a sexy, high heeled pair, but some colourful United Nudes. It wasn’t a sleazy come on, but rather a kind comment from one of good taste to another. Because classy people ride the Northern Line. 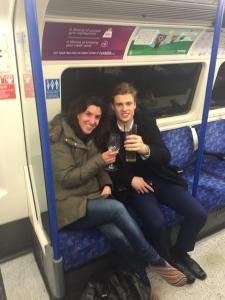 There is nothing I love more than the random encounter, like the kind I had a week or so ago post theatre. On the Northern Line hurtling home, two young men sat across from me. One was drinking beer from a beer glass. Drinking on the Tube is illegal, by the way, so it is usually done furtively. But he rested his glass boldly on his knee between sips. I couldn’t resist, “I admire that,” I said, nodding at the glass. They looked aghast, an old woman was speaking to them. On the Tube. The horror! Undaunted, I continued, “drinking a beer on the tube, and from a real glass.” They relaxed and smiled. “Yeah,” said the one with the drink, “I brought it from home.” And that was my cue to produce a plastic wine glass from my purse. They were astounded, delighted. Photos were taken (by them!) I didn’t tell them I had just come from one of the theatres with the new, fabulous, plastic wine glass policy, just let them believe that I travel the city prepared for wine at a moment’s notice, including on the Tube. The boys told me they had been to a celebration, “of sorts,” but there was something glum about the way they said it. So maybe the happiness didn’t include them? Like that story line from Love Actually with Keira Knightley and the two friends. Or maybe…well the truth doesn’t really matter because their story is now my story, and I can spin it any way I wish. And that is the generosity of the Northern Line. It not only takes me everywhere I wish to be, but gives me plenty to fire up the imagination as I go.