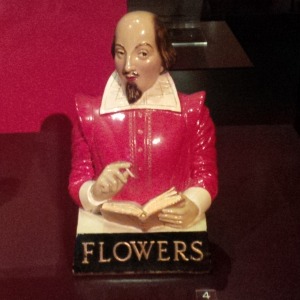 April 23, 2016,  St George’s Day, marked the 400th anniversary of Shakespeare’s death. And the 452nd anniversary of his birth. Because Shakespeare was clever enough to be born and die on the same day, that being the same day that honours the patron saint of England. Can’t make this stuff up. Being a Shakespeare devotee, but no scholar, I was excited to join in as many celebrations as logistically possible. In fact, I made it a long weekend of Shakespeare mania. But being me, it became a bit more.

I started the extravaganza with a day long course at the Victoria & Albert Museum, devoted (mostly) to the study of The Tempest, arguably one of the strangest and most difficult of plays. My children refer to it as “the weird one,” which is an ok description. I have NO formal Shakespeare education whatsoever. I rely on Google, Wikipedia, the knowledge of my English educated children and my own instinct when it comes to understanding the work of the world’s most famous playwright. Turns out, that isn’t always enough. The morning started well with none other than Dame Harriet Walter (saw her in a fantastic all female Henry IV) delivering a great Prospero-esque monologue. She was followed by Dr. Bridget Escolme who spoke eloquently on objects and costumes and sets in various Tempest productions, including the wacky film version starring (then) teenage pop star Toyah Willcox. She used lots of big words I didn’t understand, but her passion was infectious. After her came the American poet AE Stallings. Whose mind is so nimble she can flit from Shakespeare to Ovid to Virgil to Dido to Prospero to Lucretius to the tv show Lost and back again. As someone with NO background in the classics I could only sit in dizzy awe, and feel very uneducated, but in a lovely “tell me more, tell me more,” kind of way. I was mesmerized by them both.

High on these new crushes I wafted off to lunch in the gorgeous William Morris decorated V&A café, where, it being a rainy day, every tabled was packed. So I plunked myself down with two strangers….who were having the most marvelous conversation. I didn’t even try to hide my eavesdropping…. until I could take it no longer and just butted in. Fortunately one was American, so not offended, and the other was British, so too polite to admit offense. A costume historian/ripperologist from Chicago and an English writer. I was in heaven. Serious heaven. Especially when the chat moved to Deadwood, the best television after The Wire. With sadness I left my new best friends and returned to the lectures. I should have stayed and  joined them on their pub crawl.

The afternoon was so over my head I took to scrawling “I have no idea what they are talking about” in my notebook, only to be followed with “now I REALLY have no idea what they are talking about” over and over again. Enthusiasm and a will to learn can only take you so far. Sometimes you do need the basic knowledge. And I didn’t have it. The final presentation was  a Q&A with Toyah herself. As I didn’t grow up with her, I couldn’t join in the giddy excitement of my fellow attendees. That said, she looked great, wore a fabulous skirt and was very funny about the filming of the movie. On balance not a bad day. Actually, my new friends made it a great day. Thank you Alan and Karen. 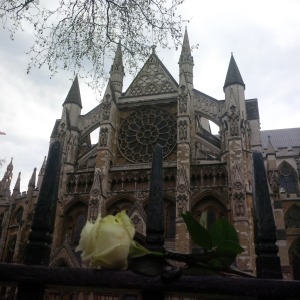 Saturday was the Sonnet Walk. I wrote last year of my love for this event (post #24 Reveling with Shakespeare,) walking round London, clutching a rose, waiting for strangers to jump out and quote Shakespeare. This year they held to the name and the actors mostly, but not always, delivered sonnets. The hilarious set up of the play within a play from Midsummer Night’s Dream and a gorgeously sung rendition 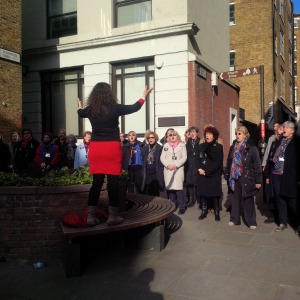 of Double, Double, Toil & Trouble (Macbeth) from The Paddock Singers out of East Sussex  being the exceptions. 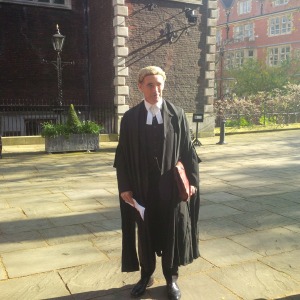 But never mind all of that. Because. At Middle Temple. Dressed as a barrister. MARK RYLANCE. The Oscar and BAFTA award winning actor. Former Artistic Director of The Globe. Mastermind of the sonnet walks. Yes, that man. Quoted Sonnet 46 and 47. “Mine eye and heart are at a mortal war….” We were like well behaved, non-screaming girls at a 1D concert….just shaking on the inside. With joy.

I have saved the best for last. Sunday. Hamlet. 2 years ago my daughter and I attended the premiere of the Hamlet that was to become Globe-to-Globe Hamlet at Middle Temple. It

was tremendous. What we said at the time is that it proved that Shakespeare doesn’t need updating or fancy sets or gimmicks. A couple of trunks, a clothes line and a few hats is enough. The words. THE WORDS (and some great acting) do the rest. We followed their travels on line. The quest to visit every country was foiled by N Korea. And some of the others had to be accomplished with a degree of inventiveness, if not outright moxy. Theatres, town squares, refugee camp tents….what an adventure. What an experience.

And two years on from our evening at Middle Temple we attended the penultimate Globe-to-Globe performance at, well…. The Globe. Happy for us, the cast was almost exactly the same as the previous. But what a difference. This was a performance that had become more than second nature, it had become owned. It was part of their very being. No line 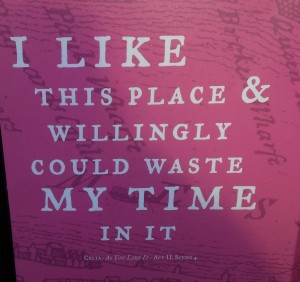 didn’t have relevance. No phrase wasn’t wise or funny or thought provoking or advancing. These were words spoken by true believers. Who had been round the world and back. And brought all that beautiful baggage and wisdom and experience with them. Does it get better than this? I don’t know. Does it matter? No. Because, because, because it proves that words matter. They matter very much indeed. And our ability to use these words to reach out over time and culture and language and make a connection….that is certainly something to celebrate!

Is there a lesson to be learned from this weekend! Yes. Yes there is. And here it is: Travel, enjoy Shakespeare (even if you don’t understand it all) and always talk to strangers. Because, to quote the great man himself, “The world is your oyster.”