On Tuesday night I was supposed to join Secret London Runs (the cleverest and most fun running company out there) to find the hidden noses of Soho followed by some pub conviviality. But it was r

aining. Hard. It was cold. I was tired. And I am a terrible map reader (no wonder I only guide inside), I can’t even follow google map instructions properly. Getting lost in a cold hard rain while running isn’t fun. So I made my (pathetic) excuses and stayed home. But the lure of the noses had me. And getting lost while strolling on a sunny, warm Saturday morning is bliss. Not least because I absolutely LOVE the morning after the night before in big cities. When the streets are devoid of people but the detritus of nighttime fun is everywhere, Show me your filthy doorways and your littered alleys. Hastily bagged rubbish and appallingly parked cars. Mysterious liquids running down pavement cracks. Dried vomit and pungent wee. Shuttered windows and 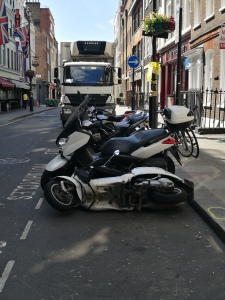 metal encased entrance ways. The silence. The stillness. The emptiness. I love it. You can walk in the middle of the road. Snap photos of street art without anyone tutting. Notice things you would otherwise never spot. A chance to look up and around. The perfect time to find a few noses.

What noses?? I can hear you all saying. Well, it turns out that there are 7 noses and 2 ears affixed to buildings in the Mall, Soho and the West End. About the same size as my own impressive honker, they have become a thing of mild urban legend. There are as many explanations for their existence to be found on the internet as, well, anything to be found on the internet. But I am going with it being a bit of a prank that has turned into a bit of fun. Nostalgic fun, as it may be. The story I am sticking to is that artist Rick Buckely molded these plaster of paris noses on his own and placed them about London, in 1997, to protest, discreetly and wittily, the ubiquitous CCTV camera. State survelliance. Nosiness (get it). There may have been 35 of them in total at the start, scattered throughout London as an art installation, and these are the 7 that remain, though two don’t fit the size or look of the others, so perhaps some additional artistic license has been used.  But no mind. A hunt for noses is a hunt for noses. And I found them all. The two ears too. 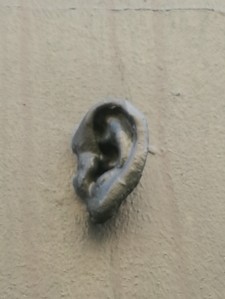 Ears?  They seem to be casts of the artist Tim Fishlock’s own ear. Why? When? What for? I haven’t a clue. Both on Floral Street. One attached to a Ted Baker shop, the other the Tintin shop. If there is a political or social message being made here, I missed it. Or else I am too worn out by the last election to care. But they are rather magnificent ears. Gorgeous helix of the auditory system. Certainly something worth smiling about. And smile I did. As I wondered about. In the early morning sunshine. Backtracking, diverting, enjoying a city stretching itself awake and taking on the day.

And all with a tremendous sense irony. Because I was hunting for what could be symbols of anti-big brother behavior in a city experiencing a heightened state of surveillance. Police, barriers, road blocks everywhere. The St. Anne’s church in Soho, which boasts a gay congregation,  had security out front  when I walked by.  I have no doubt that computers and cameras are working night and day to track people with terrible intent. And, one week on from the London Bridge/Borough Market attacks, that is exactly how we want it. Need it.

This is the world we now live in. As I walked up Haymarket I noticed the London Welcome Everyone banners hanging from above, in a variety of languages. London: multicultural, international, the best city in the world, and site of yet another extremist attack. Freedom, of the monitored variety,  the plurality of modern living.

But let’s get back to the noses themselves. Found the first one on the Admiralty Arch. It took a while to find it, but once spotted I couldn’t believe I had ever passed under the arch, currently impossible, without seeing it. Another nose on Great Windmill Street and then into Soho. Oh what a rich past this area has. The oversized protuberance on Meard (one thought to have been added later) can’t quite compete with the history of this very short street of still existing  and stunning original 18cth Georgian townhouses, including

the one with the famous sign This is not a Brothel. Then on to D’Arblay Street where I worried the crowd outside the inexplictably popular Breakfast Club that I was trying to queue barge (as if!) to find what (to be honest) looked more like a bent screw than a nose. Peeked through an olive tree on Dean Street, loitered outside the Milkbar on Bateman and found the last nose on what was an otherwise totally uninspiring printshop store front on Endell Street. Equally fun were all the Invader pieces I found. A French street artist who creates 1980s video game creatures out of tiles and mounts them high up. 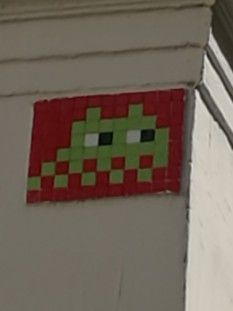 Then onto Floral Street and the fabulous ears. Ted Baker and Tintin. Lucky them.

It had been a lovely, entertaining morning. But with constant reminders of what had happened the previous Saturday. So before I headed home, I stopped into St Martin’s in the Fields. The beautiful 18th century church (having replaced at least two before it, dating back to Norman times) just across from Trafalgar Square. Currently, the nave is filled with hundreds of paper doves, folded by people in the community at large: church goers, late night revelers, visitors, people of all faiths and none. An art installation entitled Les Colombes by the German artist Michael Pendry. Doves are a symbol of peace, something so badly lacking right now. Suspended in flight, as sunlight streams through the windows,  it is a beautiful and humbling experience, full of hope. This is London.