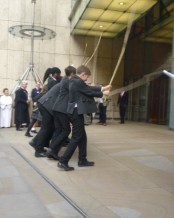 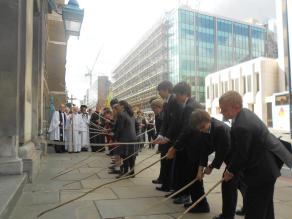 Picture the scene…..you are walking between meetings in the City, take away coffee attached to one hand. Mobile to the other. If very clever, a sneaky fag in there somewhere as well. Suddenly, out of the corner of your eye you see it. A gaggle of school aged children in smart uniform, with a Vicar, and some other people in fur-lined robes, just there on the 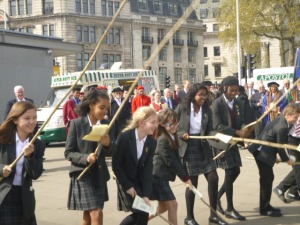 pavement. They seem to be singing. A hymn perhaps….and then you notice the sticks. The long sticks. In the hands of the school children. Who begin smacking these sticks on the ground in an enthusiastic manner. Have the post-work sessions in the pub finally rattled the brain, is this some sort of anger-management seminar, or maybe a new reality television nightmare??? Actually, the average City worker would think none of these things, would only nonchalantly move out of the way without breaking step, used as they are to crazy shenanigans in the City. Tourists, on the other hand, go wild. Cameras and phones whirring away. I would love to know how they try to explain it to the folks back home.

And here I am. In the mix. Because I do love a City ceremony, and this is one of the best. The Beating of the Bounds. Ascension Day. With All Hallows by the Tower. And St. Dunstan’s College. The Worshipful Company of the Waterman and Lightermen, as well (yes, them again, of the Knollys Rose Ceremony, post #48, a busy season!) A ceremony dating back to Anglo-

Saxon times, now just for traditional purposes, but in times of old to make sure, MAKE SURE everyone knew exactly where the boundaries of the parish of St. Dunstan’s in the East were…in case anyone got any ideas about pinching a few feet. We are a protective species, especially when it comes to land. Death by hedgerow dispute remains a reality. We like our borders and our boundaries (cue Brexit furor).

The boundaries are roughly that of the parish of St. Dunstan in the East, a beautiful 13th century church that survived the Great Fire of 1666, though Christopher Wren rebuilt the tower in the late 17th century.  Today, only the tower remains as the rest of the church was destroyed in WWII; the former footprint of the nave is now a lovely, almost secret public garden. Following its destruction, the parish was amalgamated into that of All Hallows by the Tower, which is why the privilege of leading this ceremony now rests 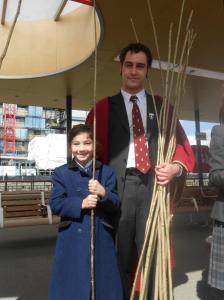 with them.  The school of St. Dunstan’s dates back to the 15th century and when, by mid-19th century, the City had ceased to become a residential area, it was moved to Catford, SE London, where it remains. What an honour to be selected as one of the students taking part; proud parents are always an element of the procession. And what a great day off school for the kids, instead of double maths some public stick smacking. Nice.

The beating starts at the Tower and then moves to the river, because the south boundary is mid-Thames. In days of old, parish worthies would take a boat out and dangle a small boy upside down by the ankles over the water and let him give the river a good thrashing. I have seen pictures. Quite remarkable really. Sadly, health and safety no longer allow this kind of priceless photo op and instead the students (boys and  girls) ride out an a vessel and tap the water, with their very long sticks,  from a standing position. The procession continues on land, stopping at several points, including the tower of St Dunstan’s in the

East, Planation House and Seething Lane before returning to All Hallows. A thoroughly satisfying afternoon. History, odd behavior, some old buildings, a little walk and men in costume. Instagrammers dream. What isn’t to love?  And next year there will be a battle. With the Beefeater’s at the Tower of London….watch this space.