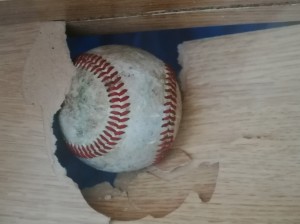 In August of 2012, while the older two were away at a Scottish outdoor adventure camp, I took the younger two to Mull, an island off the west coast of Scotland, better known to most of us as Balamory. Yes, those colourful houses on the water do exist, in fact it is a beautiful place,  rugged and hilly with lots of art everywhere, but I digress. While on Balamory, a summer fete in honour of the RNLI (Lifeboats) 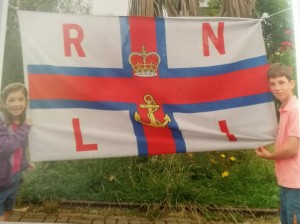 took place and one of the restaurants on the water was getting rid of their old place settings. They set the stuff up on wooden shelves and for few coins you could hurl cricket balls at the plates and bowls….and well, is there anything quite so satisfying as the sound of breaking crockery. I knew instantly that this would be the perfect THE PERFECT stall for me to run at the annual Northcote Lodge Summer Fair, the gorgeous English prep school both my boys attended, at the time. And run it I did…for 5 consecutive Fairs. 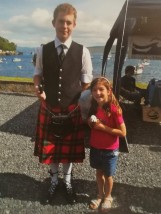 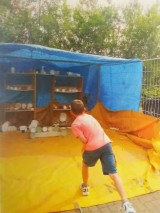 On a serious note, a very good friend of mine, a Vicar who also runs an organization to help adult survivors of childhood sexual abuse, told me recently that they often set up a crockery smashing pit at their retreats. When asked if participants would like to donate money or just bring crockery to break they inevitably choose the latter. There is just something so satisfying, cathartic even, about it. 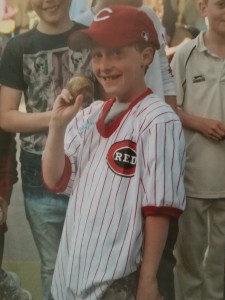 But where, I hear you saying, is the American twist. Aaahh….do you remember my post three back, when I told the tale of London baseball. At my plate smashing stall we don’t use cricket balls. I drag the enormous canvas sack of old baseballs and softballs out of the basement. The kids are fascinated. Yes, they have seen them in the movies, but to hold an actual one in their hands is a novelty. They are especially taken with the softballs. I don’t bother to explain the difference, size is all that matters at this age. Remember also in that same post how I explained that all 4 of my children have played up at Wormwood Scrubs, year after year after year. What I may have left out is that for many years, they often played on two teams, each, simulataneously. The junior team in the morning and the seniors in the afternoon. Now take a moment and do the maths. How many team jerseys (of various sizes) and caps do you think I have had in my house. Oh, yeah, and my husband often coached all these teams and had swag as well. What a perfect way to recycle all this stuff, as prizes. Prizes just for participating. How American is that!  I can’t lie. There is something so privately pleasing about looking round at the end of the Fair and seeing boy after boy after boy wearing an American baseball team jersey or cap. 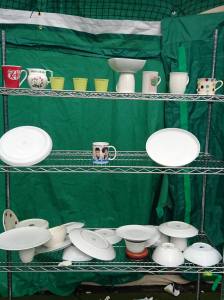 3 years ago someone donated a Frozen mug. The boys went crazy trying to break it. Suddenly there was target above all the others. It took a while, but someone finally did get it, to the cheers of all his schoolmates. Last year it was a One Direction mug that caused the frenzy, and because there is justice in my little corner of America that is the plate smashing stall, a very quiet and shy boy won the honour. Hero for the evening. 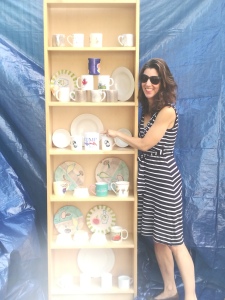 This year I outdid myself. As a joke, I promise as a joke, someone at the office gave Craig a Trump 2016 coffee cup. It was enormous. Of course it was. Craig gave

it to our older son Joseph, who posted photos of it on social media and got the insane response from his friends he hoped for. But that was back in February, so I convinced him that the joke was long over and it was now my turn to have a little fun. And destroy it. The reaction was incredible. You could have been excused for thinking you were at a Make America Great Again rally for all the chanting of Trump, Trump, Trump as each youngster stepped up, baseballs at the ready, hoping to be the one to give it the final blow. I must admit, it took a long, long time. Ole golden Donny T proved to be rather indestructible as ball after ball, tumble afte 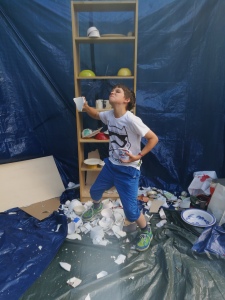 r tumble, left it unscathed. But finally it happened, and again justice was meted out, as it wasn’t one of the older, stronger boys,  one of those who had been baying for its blood, but a young one, named Finn. He was thrilled, beyond thrilled. He asked for the pieces which I put carefully into a plastic bag to take home. What he parents thought of it all I have no idea. Nor do I care. My game, my rules. And I love it.

Speaking of the parents, the school wisely keeps my stall in the cricket nets (covered in tarpaulin) in the lower playground. The Bar (of course there is alcohol at the school fair, this is England, parents wouldn’t come otherwise) in the upper playground. Therefore, there is obviously no need for them to ever wander down and see the potentially dangerous (those shards fly!) activity their precious son is engaged in. And I am happy to report that in the 5 years I am the only one to ever be injured. I always manage to cut myself on something, but a small price to pay. Occasionally a Dad will come along, bolstered by rose in the sun, and ask to play. I always warn them they will only embarrass themselves. A cricket bowl doesn’t do much when trying to break stuff on a shelf, as the ball goes down rather than straight, and while the boys can manage to adjust, the Dads can’t. Usually they just miss entirely. This year, a father managed to hit a teacher who was foolishly poking his head round the side. I was totally unsympathetic. I told you so, I said to them both 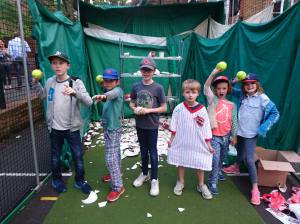 . They sheepishly returned to the bar, where they belonged.

This past Friday night was my last time as the Northcote Plate Smashing Queen because Stephen is moving on to secondary school. But I certainly went out with a bang. How I managed to get away with it, there isn’t anything health and safety about it, I don’t know.  But boy did the boys love it. Boy did I love it. And for two short hours  that nagging existential question: Why am I here? was answered. My epithet may read “she let boys smash things,” and that would be very good indeed.