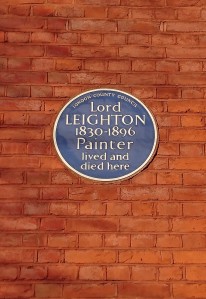 I said I was going to start 2017 as I mean to go on, and so on  2 January, Bank Holiday Monday, I braved the very crowded public transport and went to a place I have been trying to get to for years. The Leighton House. I was joined by my friend Samuel, who I knew, perhaps more than anyone, would appreciate its beauty. Its beauty for the sake of beauty alone. Lippincott’s Monthly Magazine said of the house, in 1893, “For it does one good, in this age of utility, whose motto is “The Money Value”, to enter rooms where beauty takes precedence of utility, and artistic excellence is more highly esteemed than commercial value.” What was true in 1893 is even more true more than 100 years later. Samuel, of Oscar Wilde fame (see post 6, Passion for All), is a man who shares my ability to be passionate, truly passionate, about life. He has also spent the last 9 months travelling in Asia, and like so many before him, feels transformed by the experience. If ever there was a soul open to aesthetic, it is Samuel. And it was wonderful to see him, looking extremely well and wearing a dashing shawl from Nepal. I felt terribly underdressed. But is hard not to in the Leighton House. “I want to live here,” we kept saying to each other. Or if not live, stage some Oscar Wilde there….oh, a plan for 2017, perhaps. But I digress. Lord Leighton and his magnificent house.

So who is this guy? Frederic Leighton was a Victorian artist who rocketed to fame when Queen Victoria herself bought one of his paintings. He became President of the Royal Academy, in 1878, a position he took extremely seriously and remains the only artist to be elevated to the nobility,  although he died very soon after receiving the title (and is buried at St Paul’s). Nevertheless, he is almost always referred to as Lord Leighton today, if never

in his own lifetime. In 1866, he built a studio/home in Holland Park, a rather plain red brick house from the outside with a series of gorgeous, gloriously decorated rooms on the inside. Filled with treasures he, and later his well appointed friends, collected in travels throughout the world. In particular, tiles from Damascus rescued from old buildings that were being razed to make way for the new city. A mashrabiya from Cairo, middle eastern ceramics, fine furniture and art, of course art. His own art and that of his contemporaries, including the Pre-Raphaelite Brotherhood, those bad boys of the Victorian art scene who lived fast and hard. The house was damaged in WWII and then restored in an appalling  manner (strip lighting! laminate floors!) Fortunately, some intelligent citizens took it upon themselves to restore the house to as close to its former glory as possible, including the purchase of original and the commissioning of replica furniture and artworks that were or could have been in the house during Leighton’s time. Leighton was a fantastic party-giver. But the house has only one bedroom. His own. A small, almost monastic room. Come to my fabulous parties, but you cannot stay! Oh how I admire that!

There has been much speculation about Leighton’s personal life. Professionally as both artist and administrator, much is known, and he frequently entertained, including Queen Victoria herself. But he was a private man. Never married. And his narrow single bed does not suggest a secret passion, at least in the form of another human being. But passionate he certainly was. And his passion, as so often happens, has only inspired more passion. One of the reasons I wanted to visit is that on display now is what might be Leighton’s most famous painting, Flaming June. A stunning redhead in a gauzy, flowing orange dress, curled up asleep on a chaise in the med sunshine, a sparkling sea behind, her distinctly female form very much in evidence. Thought very sexy and provocative in its day, in 1963 it caught the attention and heart of a Puerto Rican industrialist, Luis Ferre. He bought it. Such is my love of romance, I wanted to hear that Ferre kept June under lock and key, spending private hours gazing and sighing, letting no one else near it. But in fact, he hung it to the Museo de Arte de Ponce, in Puerto Rico, where it was given pride of place . The painting has since travelled around the world and is here, on loan until April 2017,  in the very house in which it was painted. A happy homecoming indeed.

And what of this house? My goodness it is incredible. Photography is not allowed inside, so I can’t wow you with pictures. However, even the professional, catalogue photos don’t really do it justice. The Arab Hall is something that needs to be experienced, something you feel as much as you see. The blue tiles, the mosaics, the wooden lattice work, the chandelier, the fountain. What a thing it would be to curl up on the cushions and read. Or just day dream. The red walled Dining Room oozes convivial evenings, the Silk Room upstairs is subdued glamour and the Studio, with its view over the garden, is a space one could linger in. For ages.  And so we did, Samuel and I. Admiring, chatting, vowing great plans for 2017. Because it is a house for the passionate and the ambitious and the fabulous….start  as I mean to go on. Beautiful.