The Chelsea Flower show. The scramble for tickets, the hype, the rumours, the controversy, the Queen’s nod of approval, the breath holding for medals, the summer dresses and the rain, so often the rain, No, I am not being sarcastic. Chelsea is all these things, and more. When Britain’s favourite hobby is given the royal treatment and the country is caught in an infectious grip of gardening fever. The King’s Road is busier during Chelsea week than at Christmas, as matrons from all over the nation pack the show in the morning, casting a discerning eye over new varieties and inventive landscaping and then flock to Peter Jones in the afternoon. It is a time when we all think we are all, if only briefly, seasoned gardeners with valid opinions on the work of professionals. I love the Chelsea Flower Show. I went the first year I moved to London. I was still in the early, queasy stages of pregnancy, the weather was cool and drizzly and the crowds rather overwhelmed me. But I loved it. And returned year after year. I even joined the RHS simply to be able to buy tickets for the slightly less busy Member’s Only Days. I often went with my friend Melanie and we walked and looked and talked. And talked and talked and talked and talked. One year we talked so much that we forgot to look at a single garden. Not a single one. We had to watch the Today at Chelsea

highlights that evening just to come up with something to mention in the subsequent “how was it,” conversations. After that, I decided to take a few years off. Let my RHS membership lapse. Contented myself with the television round up during the week. Until this year, when I knew it was time to return. With Melanie. We would make an effort to see everything and eat ice cream.  Which we did. On the most glorious of English spring days. Sunny, warm and beautiful. It was everything I hoped it would be. And more. Because this year it wasn’t a flower that stayed on our minds, but slavery. Yes, I said slavery. Sometimes a garden is more than a garden, sometimes it is a beautiful invitation to start a very difficult conversation.

I have always preferred the smaller gardens to the Show gardens. This year was no exception. It was in the Fresh section that we found The Modern Slavery Garden, designed by physician turned gardener, Juliet Sargeant. The concept came about in reaction to the Modern Slavery Act, passed by British Parliament in 2015. In addition to listing new criminal offenses, extending powers of enforcement and introducing new measures to tackle human trafficking, the act encourages companies to study their supply chains and

distance themselves from any suggestion of slave labour. This last bit is hoped to be accomplished with consumer pressure. Because, as the informative garden pamphlet states, “90% of change comes through people taking action. Only 10% by changing the law.” This means, we are all responsible. Quite a heavy message for one little garden to carry. But wow, it managed it. Beautifully.

Familiar front doors with complimentary railings, looking so much like the entries to our own homes. But no one really knows what goes on behind doors, even well manicured doors with shiny knockers. And this is the point. Slavery is so often a hidden crime. 5,000 people are held in slavery in London alone. Of the estimated 27 million slaves in the world today, 14% are held in domestic slavery. A dear friend rescued a Phillipina woman years ago; it is a story that is uncomfortably familiar.

In the center of the garden was an oak tree, because William Wilberforce, leader of the abolition movement in Britain, stood under an oak when, on 12 May 1787, he

announced his intention to dedicate his life to ending the slave trade. Smaller oak seedlings were dotted round the garden, a tribute to those who continue Wilberforce’s work today.

And within all the doors and symbolism, beautiful, beautiful plantings. Bright, vibrant colours of peonies, fox gloves, euphorbia, lupins and a brand new rose, created specifically for this garden, the Modern Slavery Rosa. Beauty and misery all on one tiny plot of earth. It certainly got everyone talking. The girls handing out pamphlets were eager to chat, and that is exactly what this issue needs: for people to talk about it. A lot. And ask questions. Join the #askthequestion campaign. Just take a photo of a product. Post the photo to social media, tag the manufacturer and use #askthequestion, #slavefree. The intention being to force companies to disclose whether any of their products, even far far down the line, are made by slaves. Will it work? I don’t know. But given the volume of utter rubbish on social media, using the platforms as a change for 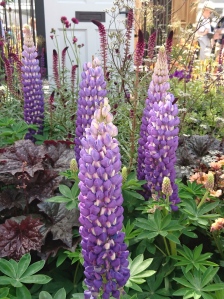 good seems worth a try. Who knows, it might actually work. And in years to come, we won’t need a gorgeous garden to remind us of a terrible truth. The Chelsea Flower Show: admire the plants, change the world. Fantastic!