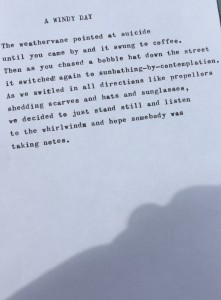 When the sun is shining there is no more beautiful place in the entire world than London. Perhaps it is because sunny days are not to be taken for granted on this northern isle, especially this spring. The weather has been fickle, to say the least. So, on Friday, when my frequent partner in adventure, Sara and I exited the Tube at Embankment, with the intention of visiting the Botticelli drawings at the Courtauld Gallery, we couldn’t bear to go inside “Let’s just stay outside a bit longer,” said Sara. So we walked through to the Somerset House terrace. The Thames was sparkling in the sunshine. The Eye was visible through the buds on the trees, framed by endless blue sky. London was aglow, as only London can be. Magic.

Then we noticed some activity to our right. Tents, chairs, tables….oooh what is this? And so I said, in my loud American voice, “Ooooh what is this…” As if by command, Richard, head chef of soon to open Tom’s Kitchen at Somerset House appeared. For the summer, outdoor drinking and dining, ideal place to meet up with friends…We made enthusiastic responses. Soft opening Tuesday night, press night Thursday, want to come??? Well yes, we do. But can’t do Thursday, maybe Tuesday? Weather permitting….Oh, Sara and I do like to be the first at things….

Still reluctant to go inside we continued along the Embankment. To Two Temple Place. A little jewel of a building happily unknown to most. I intend to dedicate a whole piece to its worship so don’t want to say too much now, except that it is only open to the public for occasional exhibitions, and I knew the recent one was over, having visited on the penultimate day, previous week. But the movers were still carrying things out. And the doors were wide open. “Oh, please can I just show my friend the staircase. Two minutes, I promise.” I begged the foreman. He broke into a wide smile. “Two minutes.” Sara admired it as I knew she would. Greatly. And then I told her it was available for private parties. We are forever planning our fantasy party at dream locations all over London. Add this one to the list.

Where next? Southbank of course. Over Hungerford Bridge….and, suddenly, nothing. Or no one, actually. After the madness of the recent Shakespeare extravaganza and the all too familiar jostling with clueless tourists in my favourite part of London, it was almost eerie to have it to ourselves. Nice, but eerie. Where was everyone? At work (as Sara was supposed to be, but I am a bad influence) or perhaps scared away by the dire forecast. What a pleasure to stroll along, admiring the city from Bankside without having to navigate selfie sticks and packs of bored school children. As we approached the Tate, discussing whether we pop in for coffee  there or continue down to Borough Market, I saw him. The Southbank Poet. I have been looking for him forever.

And there he was. Between the man blowing enormous bubbles and the musician. At his little table with his adorable green Olivetti typewriter sat writer and poet, Lewis Parker. I had heard rumour of him for years, but had yet to find him myself. His sign offered poems, stories and suicide notes (certainly not!), & more. We later found out later that the “more” tends to be resignation letters.

“There he is, there he is,” I shouted at Sara, grabbing her arm excitedly, like a crazed pop fan or royal family devotee. If she was surprised that the object of my enthusiasm was a young, serious man with typewriter, she didn’t let on. She knows me well, after all.

We rushed over. Oh please, please write me a poem. He nodded and asked if I could provide either a subject or a title. Something cheerful, because I am the happiest person you will ever meet and it is a glorious day!!! He nodded calmly, unfazed by my exuberance. “Give me ten minutes,” he said

So we wandered a bit further along. Then watched as another man approach Lewis and demanded a poem , “I am in a rush.” A rush for poetry. How extraordinary.  He seemed desperate, unhinged almost. So I graciously nodded to indicate it was fine to take him first. And so we stood, Sara and I, gazing up over Millennium Bridge toward St Paul’s.

With the trees rustling and bending in the increasingly strong wind. Daydreaming. Nowhere else on earth I would have rather been at that moment.

I wrote recently about my desire to learn to read poetry properly. (On Good Friday and Poetry, 38/100) The mastery of verse remains a mystery to me, but one I very much want to crack. I fantasize of spending my advancing years sitting somewhere lovely, with a small tome in hand, relishing the beauty of the words. It must be considered progress that on this gorgeous day I was having a poem written for me, on the Southbank.  By the Southbank poet.

And here it is:

The weathervane pointed at suicide

until you came by and it swung to coffee.

Then as you chased a bobble hat down the street

it switched again to sunbathing-by-contemplation.

shedding scarves and hat and sunglasses,

we decided to just stand still and listen

to the whirlwinds and hope somebody was

We read it out loud. Loved it. I was delighted. More than delighted. I may have it framed. We thanked him verbally and monetarily, profusely and vowed to stay in touch. Then, as I clutched my poem and began to walk away, it started to hail. And snow. Because London is magic. Pure magic.