My love for London is not the wise, compassionate, made sensible by experience kind of love. But the passionate, impulsive, reckless, all-encompassing love of the utterly smitten. The totally besotted. The completely infatuated. A love that convinces itself it is requited, because to believe otherwise is not possible. So when something lovely happens to me in London, and lots and lots and lots of lovely things happen to me in London, it isn’t because I am seeing magic in the ordinary, or that I am just in the right place at the right time, or that a series of actions has a logical result, rather I believe it is a thoughtful gift from my equally enamoured lover. London. A city that is so of the moment its gender is fluid. Sometimes definitely female. Other times dizzingly male. And all for me, me, me, me. 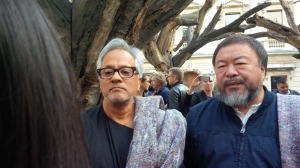 The start of the academic year always makes me feel a bit low, back to school blues. So I was delighted when a friend told me that Ai Weiwei and Anish Kapoor were going to be walking, a stroll “as they take every day,” explained Kapoor, from the Royal Academy on Piccadilly through the streets of London to Olympic Park. Certainly not a protest, as that would get Weiwei in trouble, but a small, everyday experience as an act of solidarity with refugees worldwide. And the public was welcome to join. I didn’t need to be asked twice. What a thing to be near two men for whom I have such respect and admiration, and in the case of Anish Kapoor, a serious crush. On such a beautiful, sunny day as well, following what felt like weeks of pouring rain. Obviously I didn’t think any of this was simply coincidence or even the power of social media, but yet another offering of love from London

Like many others, I first became aware of Ai Weiwei when he did the incredible Sunflower Seeds installation at the Tate Modern. Millions of handmade, hand painted ceramic sunflower seeds spilled out over the Turbine Hall. I took my children to see it many times. Sadly, the Tate decided against allowing people to walk through the seeds, citing something silly about health and safety. More likely they were afraid we would fill our pockets and leave the floor bare all too quickly. I later read that thousands of extras were made for exactly this scenario, yet we were still kept behind a rope. Nevertheless it was an extraordinary sight. And a fantastic visual for the explanation of a totalitarian regime and the people that live under such a government. Weiwei’s subsequent detention and increased political outspokenness have made him as famous an activist, if not more so, than artist. A true inspiration.

With Anish Kapoor it is much less intellectual and more tactile, visceral. From the first moment of experiencing his work I was hooked. I went to his 2009 show at the RA many, many times. All that red wax made me week at the knees. I went out of the way to visit his Sky Mirror in the City, in 2011. My husband convinced me to travel to Chicago for a weekend, 3 years ago, on the basis that I could spend time with Kapoor’s Cloud Gate. I can spot his work at impossible distances. I might even be able to sense when his work is nearby, such is my fondness for it. And while I would happily travel distances to see his art, I never once considered that I could meet him. Let alone kiss him…ooh London…

I was certainly not alone is my wish to walk with these two great men, and so a gaggle of the interested and the curious, along with an unfortunate crowd of paparazzi set off. For the first part of the walk I was joined by my up for an anything friend Lucy. She left me at Spitalfields for the circus (not kidding) and Sara my art mad friend joined. Sharing adventures with people of passion make things doubly fun. And doubly funny. The sky was blue, everyone was friendly and talkative, London glistened and twinkled in the sunshine and on and on we walked, not necessarily in a straightforward way. Through Westminster and the City. Along Brick Lane and Victoria Park and finally into the Queen Elizabeth Park, site of the 2012 Olympics, and finishing under the Kapoor Orbit, a structure in which I have done yoga and visited so many times I have an annual pass (not kidding). 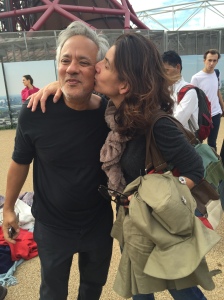 And it was here that I saw Anish Kapoor standing on his own and I launched myself at him. First gushing about how much I loved his work and how much of it I had seen and how I follow what he does….you know, typical overly enthusiastic fan stuff. And then, emboldened by the fact that he seemed pleased to hear all of this, I asked if I could have my picture taken with him. He agreed and the kissing began. Back and forth and back and forth and then Sara joined, why wouldn’t she, and he said “I have never been kissed so much before,” which made us all laugh and laugh and start again. One long, glorious, lovey-dovey, adrenaline rush. With photographs. Obviously. 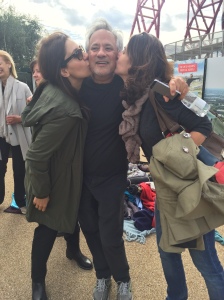 We also had a moment with Weiwei. Being the social media king that he is, he took Sara’s phone and said simply “I take photo,” which he did. And then disappeared. A most wonderful day indeed! 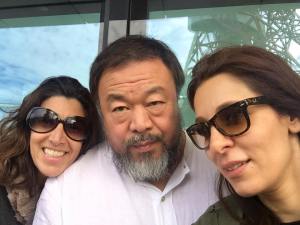 Only on reflection on the Tube home did I understand what London had really given me that day. It wasn’t the chance to be near these two men or even the opportunity to have moments, albeit it a pretty fantastic several moments, with them. Instead London allowed me to meet two heroes. Always a dangerous thing. But they didn’t disappoint. Quite the opposite. Ai Weiwei was stoic and kind. Anish Kapoor divine. Simply, totally and utterly divine. No wonder his art is so sexy. I didn’t come down off my high for days. And days and days.

At times like this, even I don’t believe I get to live this life. Thank you, thank you my passionate, beautiful London.