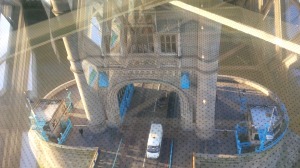 I am a great believer in doing things just because I can. No more justification necessary. If the offer is made, I am usually there, even if it isn’t something I am good at or particularly enjoy. “So I can say I’ve done it” is one of my many mantras. I also believe that just showing up is 90% of the living life to the fullest philosophy I espouse. And so, yesterday early morning, I was holding (what I hope were elegant) yoga poses on the glass walkway of Tower Bridge.

I am nothing close to a yoga devotee, in fact I usually find it too challenging both mentally and physically to enjoy. And I don’t like heights. But the experience….how could I possible NOT do it. And have

the privilege of boring everyone for years to come by blurting out “I did yoga up there” each and every time we were in eyeshot of the bridge.

I admit I was questioning my decision-making skills as I headed into the City, even more as the lift seemed to rise and rise and rise, but then it was too late to back out. I took my place on the walkway and…..

and I loved it. 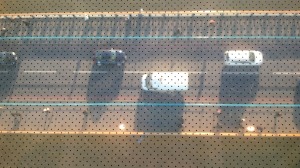 Every minute of it. It wasn’t scary or painful or cold or boring. I watched the river, from many downward dog positions, tumbling and sloshing and glistening in the bright morning sun. Boats sailed beneath. Cars and buses rushed along the bridge. But the people, not very many at that early hour, were strolling. Some stopping to watch the river themselves. Or just to think, gazing out at London. The Shard sparkled. The cranes blinked and swayed. And the bridge itself; Horace Jones at his most magnificent. All that gorgeous steel framework.

The yoga was lead by the very pretty and impressively flexible Billie. She was enthusiastic without any of that new-age earnestness that makes me want to collapse in a lump, roll my eyes aggressively and consider taking up smoking just out of spite. To the contrary, she found that balance (ha ha, a little yoga pun there) between encouraging and relaxed. Billie teaches all over London, and told me there is talk of offering this class in/on other London landmarks. Oh, yes please!

My other classmates were much younger but of mixed ability. Admittedly most of us were there for the photo-ops, and there was some lovely, friendly chat at the end as we all whipped out our

phones and captured the views. I was even interviewed for French radio about the morning.

And then we left. Some to work, some to other London adventures, some, like me, back home. Feeling refreshed and calm and with an overwhelming sense of gratitude. Because I can. So I do.